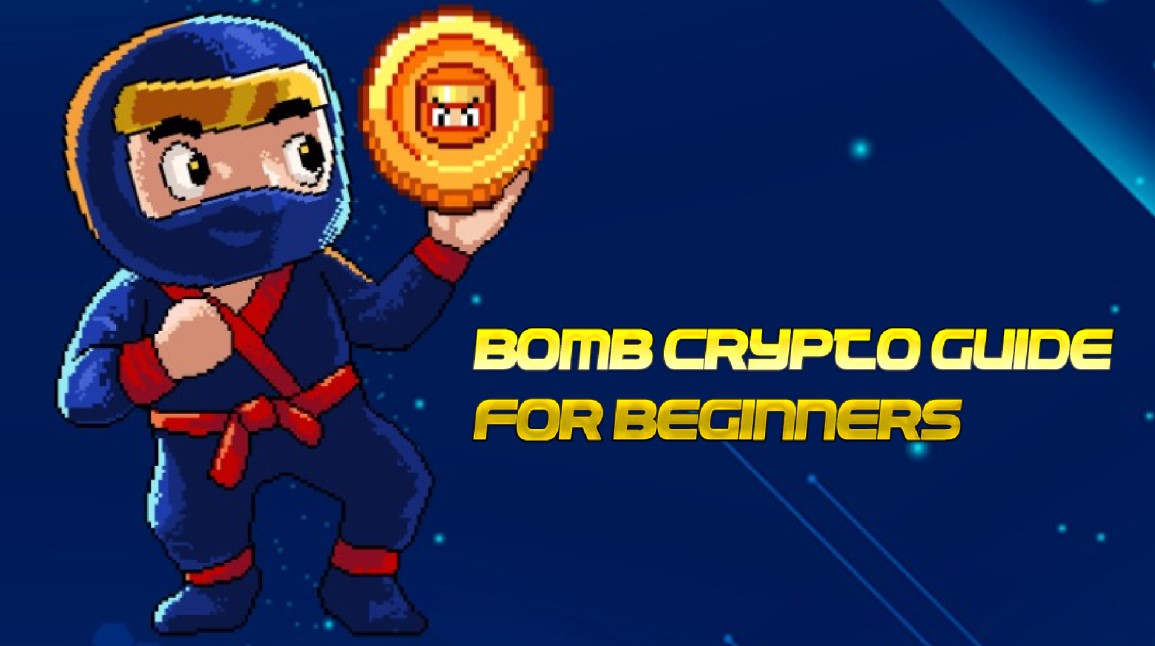 Welcome to the Bomb Crypto guide for new players! In this guide, I will go over the tips that will help you increase your Bcoin farming returns. This game is one of the more passive NFT games that allows you to spend as little as 15 minutes a day to earn some passive income.

Let’s go over the key metrics you need to know when you decide to enter the game. The game is not free to play and requires you to invest at least some money to even start it. When you first get in the game, you will need to purchase at least 10 bcoins to mint (summon) 1 bomber. The current price at the time of this writing is $3.58 USD. So the minimum invest is $35.80 + some fees, so about $37 USD.

The current drop rates for a bomber is: 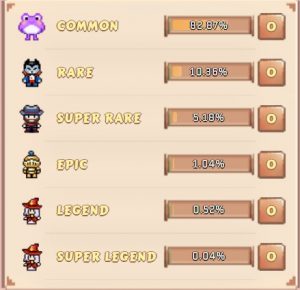 So the odds of you getting a common on your first summon at 82.87% is highly likely. Unless you got lucky and pulled a rare or super rare, you will be looking at a common bomber. So the best way to start is to invest at least 10 as it will give you a decent chance at pulling a rare, super rare or in some lucky cases, an epic or legend. Here is a useful site called the Bomb Crypto Simulator that helps you visualize your ROI. 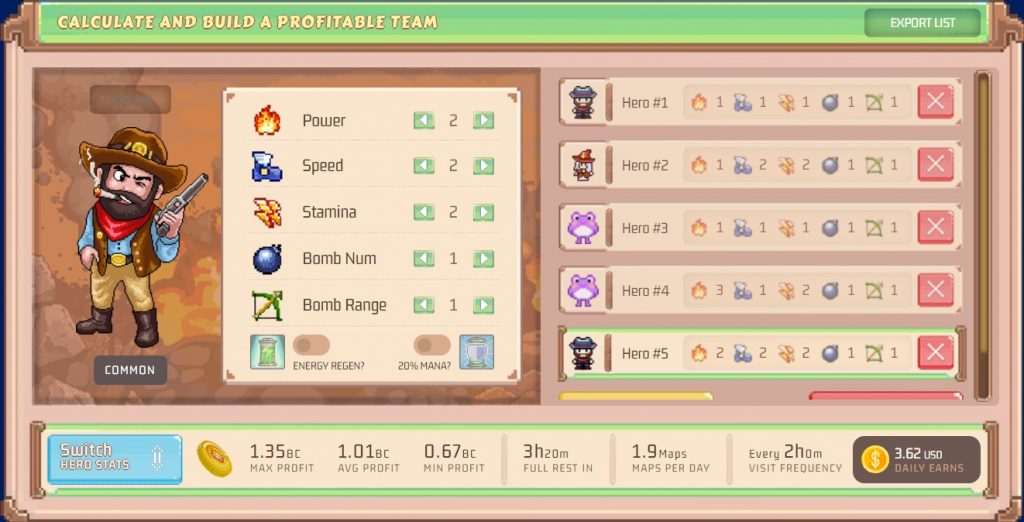 I simulated a team of 5 common heroes with an average stat base without and energy bonus or 20% mana bonus. On average, you can expect about 1 bcoin mined. So for example, if I invested at the price of $3.62 USD per coin (NOT FINANCIAL ADVICE!!), I would spend ~$181 USD. So my full return of investment would take about ($181/$3.62) = 50 days. That is pretty good. Of course the risk would be the price of the coin plummets and it will take 2-3 months to re-coup my investment.

If I got lucky and managed to pull a super rare (with energy skill) out of 5, then the equation changes to: 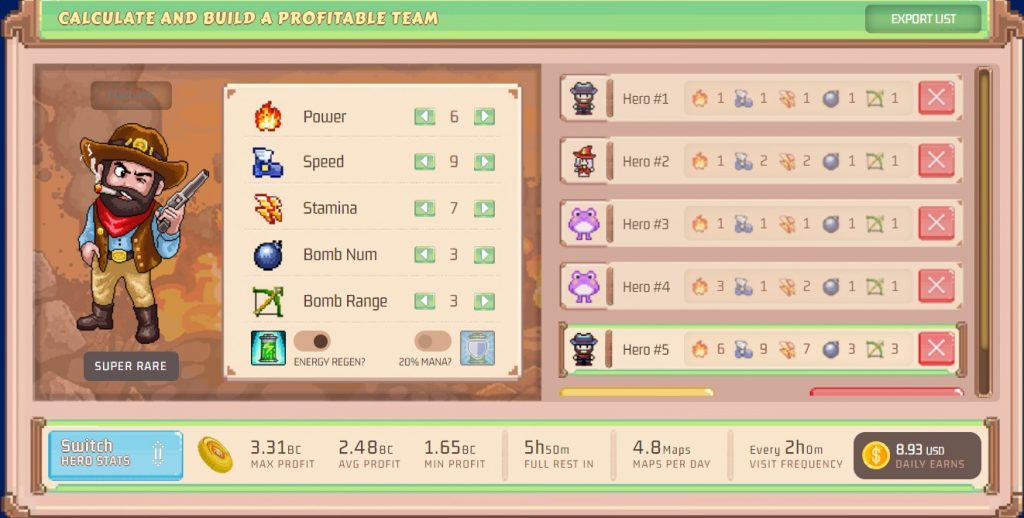 My average would go to almost 150% and earn 2.5 bcoins on average. This reduces my ROI to about 20 days. That is quite amazing. After that, if the game goes on and becomes popular and lasts more than a year, you would have built a risk free asset that could potential go bonkers.

The more you invest, the higher potential faster ROI you can get when you can pull a super rare or epic. I personally pulled 13 times and got 11 commons and 2 super rares. So I was a bit lucky there. Currently averaging 6 bcoins a day, with a 28 day ROI if the price remains around the same.

Also keep in mind that it takes at least 1 bcoin in your wallet and at least 40 mined bcoins to claim it! So with that out of the way, let’s get into the tips and tricks that will help you mine more bcoins daily!

Commons are useful, contrary to what most people think. A common bomber can have stats varying from 1-3 for Power, Speed and Stamina. So if you can one like this: 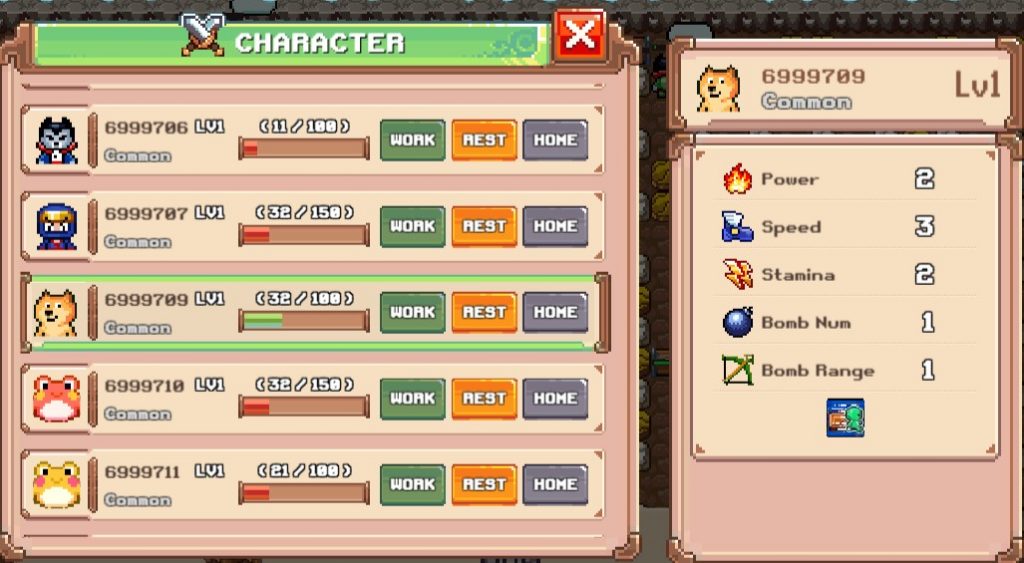 This is quite good because a 3 speed bomber can run faster, plant bombs and destroy chests quicker than say a 1 speed bomber (they are the worst). You are stuck with these until you can replace them with rares, super rares ad epic+.

When the marketplace is released, trying to get a few of these 3 speed commons will be good for your team. The reason is because in treasure, if you have a rare+ hero, they usually have a 4+ power bomb. The walls that appear in a map can be easily deleted by a 1-2 power bomb. So if you are running a rare+ bomber, you just wasted 2+ points of damage to the walls.

When chests are this low, you want to avoid using your high power bombers to break walls, which take 1-2 power bombs to destroy. Bring out the commons!When starting a treasure hunt map, you want to use your fastest and strongest bombers (rare+) as the AI will all focus on the chests. Once you get the majority of the chests to about 5-10% hp, you will want to switch to all the common bombers with 1-2 power to clear the chests and walls. This gives the best return of bcoins.

When chests are this low, you want to avoid using your high power bombers to break walls, which take 1-2 power bombs to destroy. Bring out the commons!

So each bomber recovers 30 energy per hour. However, if a bomber has the battery skill, he/she will recover 60 per hour. This is especially useful for commons and rare bombers, as you can use them every 2.5 hours and get them up and running on treasure hunt mode!

Keep in mind that if you exit the game without pressing rest on your bombers, they will not recover energy while you are offline. So make sure to do that before you log off.

Buying a house will also speed up your resting time. However, it is only worth it if you have a team of super rares and higher. Most people won’t be owning a house early on, so just focus on getting a good team of 10 bombers. For example, a team of 3 super rares, 4 rares and 3 commons is a good one to aim for early on.

I would only recommend upgrading a bomber if you have rares+ and higher. They are key to helping you destroy the tougher chests.

To upgrade a bomber, you need:

The link to this useful community guide is here: https://docs.google.com/spreadsheets/d/1hW6-ZJ-fBK_jQMBwW8jQDRs-rVn3iqkXsTTPNmhzrSU/edit#gid=80555466

Upgrading to level 3 is quite worth it for rare+ and higher. each increase in bomb power improves a bit. For example, a rare bomber with 5 stamina (250 total) would get an additional 250 damage points when upgraded to level 2. A super rare with 9 stamina will get 450 extra damage.

Just keep in mind that this is only worth it after you have a solid team setup though.

Playing Every 3-4 hours is Optimal

To further improve your bcoin earnings per day, it is best to play in 3-4 hours intervals if you can. Most common bombers with 2 stamina (100 total) will recover their energy in about 3.2 hours or so. Playing every 4 hours will ensure  you get the full benefit of them mining. However, this is not doable for some folks as people have to work. So do your best to play at least 3 times a day if you can.

Some of the most sought after bomber skills are:

These are quite good as they improve your bcoin farming speed. I would look for these if I were buying from the marketplace.

That is it for now. I will add more as the game releases more updates! 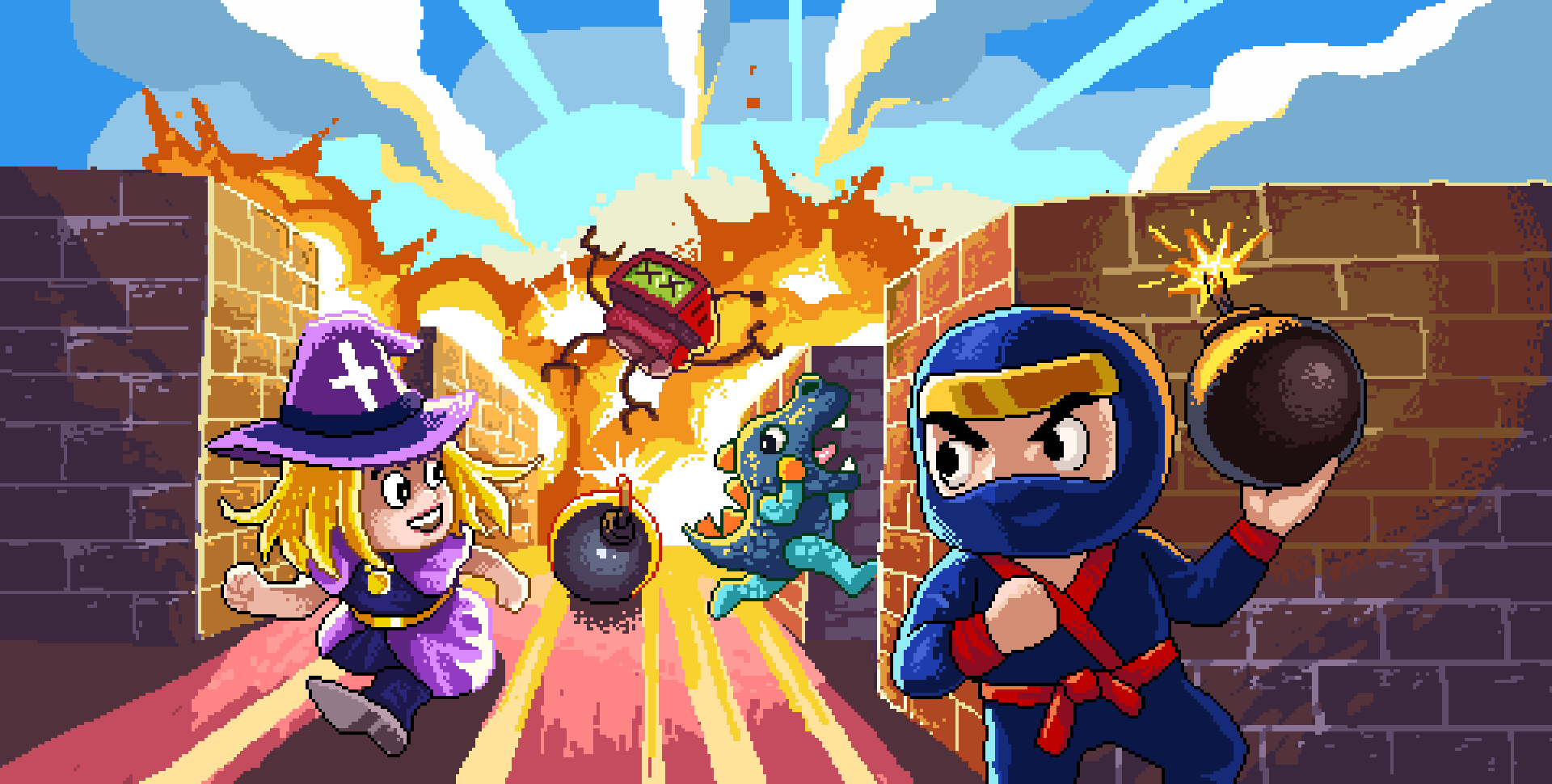 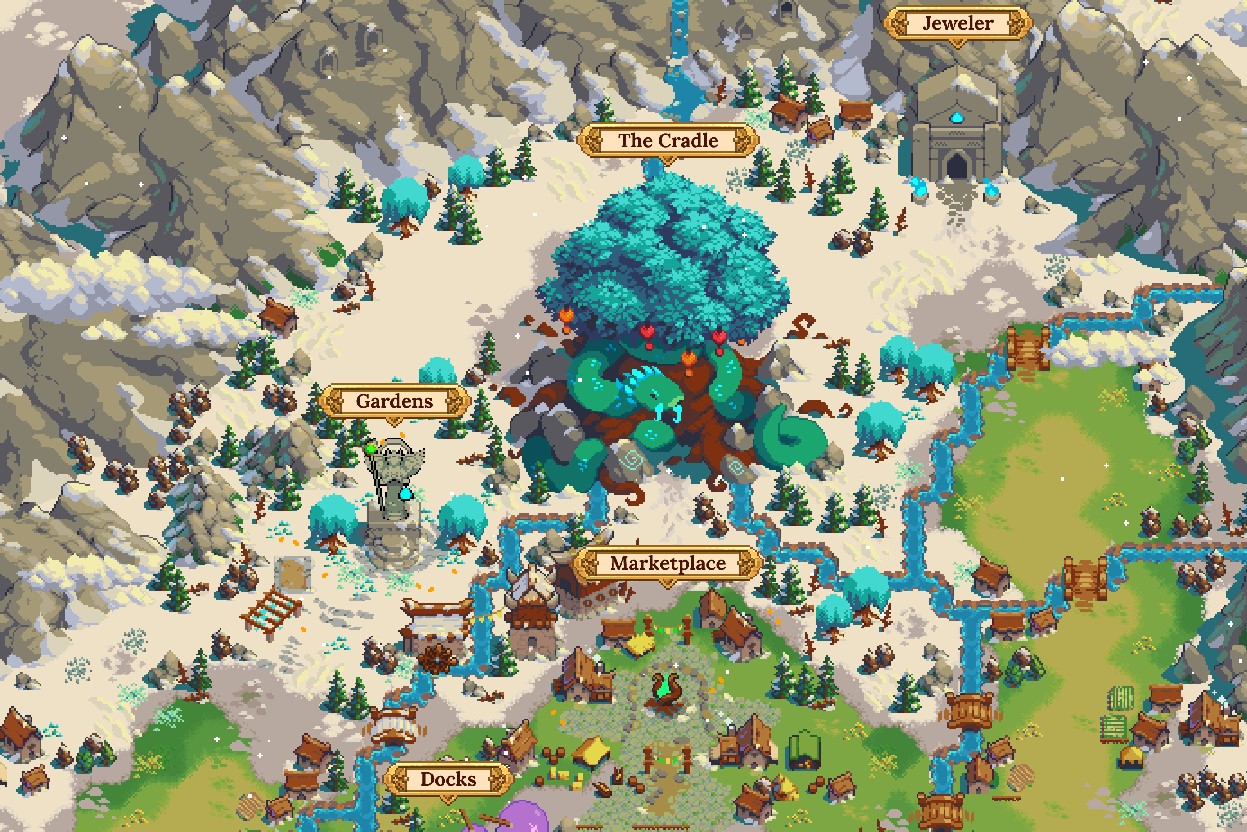 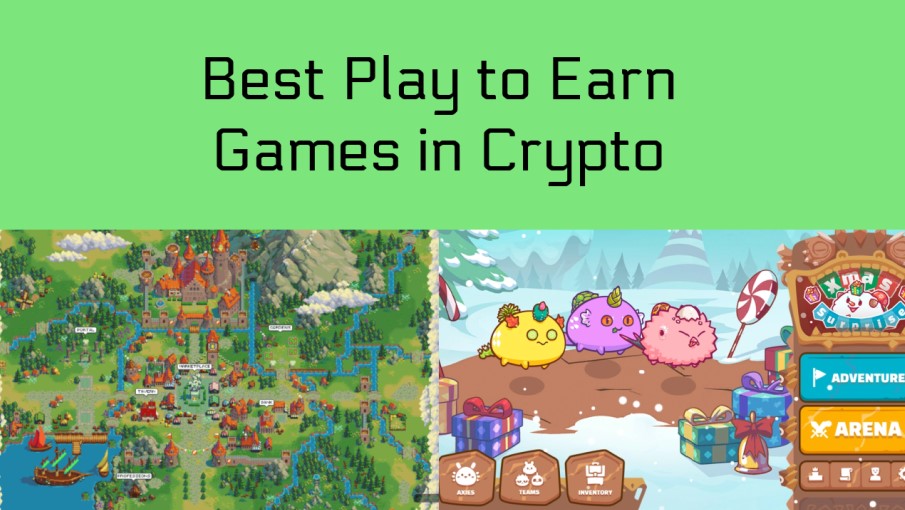